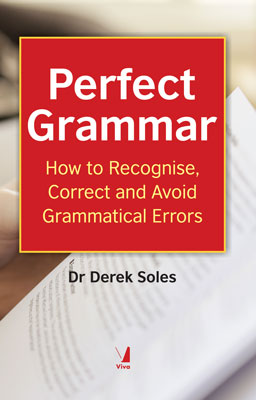 How to Recognise, Correct and Avoid Grammatical Errors

Ideal for Students, teachers, business people, and creative writers
Who else wants to make their writing sparkle? How often have you written something and not been sure if it is correct? Should you write • its?, • it's? or • it is? Armed with this book, you will never make those errors again. This is an essential guide for students and teachers in education and for people in business. Communication is in any organisation and good grammar is the  oil that lubricates the flow of communication.

The book explains:
•  The causes of run-on sentences
•  Pronoun reference and agreement
•  The many enemies of sentence clarity
•  How to avoid sentence fragmentation
•  Verb tense
•  Subject-verb agreement

As well as this, the book explains the rules of punctuation and the relationship between grammar and usage.

This book is helpful for students and academicians of English business people and creative writers.

Dr Derek Soles teaches in higher education and is a very experienced teacher of English. Derek soles is the author of The Academic Essay, from Studymates.